It must be difficult for visual artists who live in Tasmania to not be affected by the spectacular natural environment that surrounds them. Maybe its something in the air, or perhaps its carried on the wild roaring forties – westerly winds that travel around the globe at 40° south. There seems a freshness and originality in much of the art that has emerged in recent years from our southernmost state, and the work of Caroline Rannersberger is no exception.

Rannersberger lives on Bruny Island off the south east coast of Tasmania. Geologically Bruny is actually comprised of two landmasses, joined by a narrow sandy stretch of land called an isthmus. Rannersberger says that from the north-west facing windows of her studio, she can see out to the water and the sweep of land that runs to meet it. She has lived on Bruny for the past five years, observing the terrain and seascape, allowing the experience of it to flow through her and into the paintings she creates. A friend once told me the weather in this part of the world is more accurately described as an event, and these recent works by Rannersberger contain some very eventful moments. 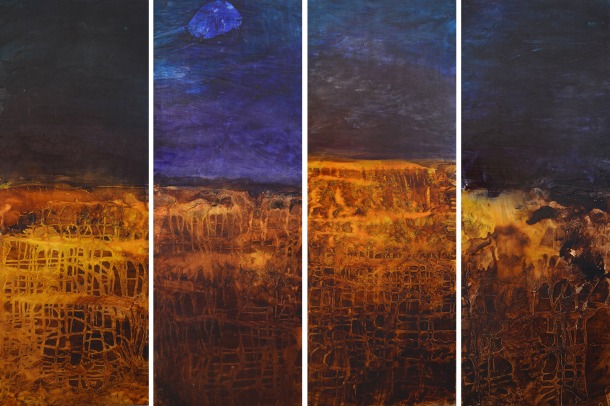 Rannersberger does not adhere to pictorial conventions associated with traditions of representing the landscape. Instead she seeks to engender a tripartite relationship between the painter, the painted, and the process of painting – meaning that each is equal in importance to the final outcome. Each work begins with direct experience, drawing and painting within the landscape itself and actively allowing the elements of nature to affect the resulting marks. Many of her works at some stage in their long process of evolution have been buffeted by wind, rain, sand and dirt – sometimes even insects have left their microscopic impressions on her surfaces.

Back in the shelter of her studio Rannersberger lets the process of art making drive the resulting imagery. She slowly builds up layers of inks, acrylics and pigments mixed with various mediums, and allows these materials to interact. Like the physical, chemical and biological forces that shape the earth’s surface, or its geomorphology, Rannersberger’s works are the result of sometimes unpredictable, dynamic processes that her materials engender when they collide on the picture plane.

Her layered way of building up the works result in highly textured surfaces. Rich in pentimento, the artist balances areas of density with transparency. The effect in some paintings is almost opalescent, like looking through a crystal and catching flashes of submerged colours and shapes. Forms emerge and recede, and the horizon line rises and falls in panels, unsettling a clear reading of the image. This encourages the viewer to consider each artwork less as a landscape view, more as an object shaped by experiential encounters and elemental forces of nature. 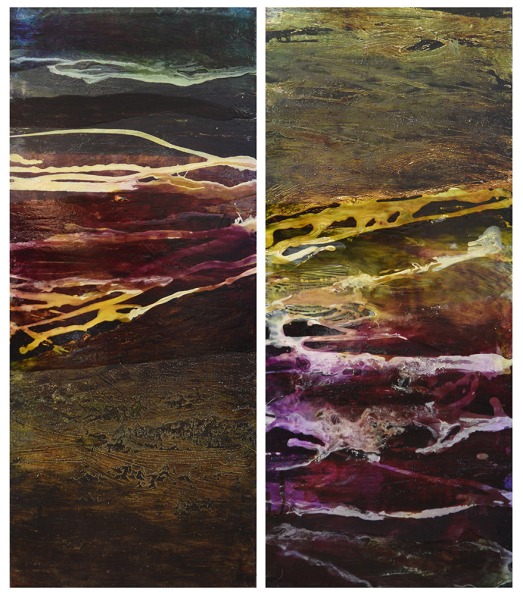 Soaked in colour, Rannersberger evokes the deep blues and purples of the ocean, along with yellows and ochres, and algae greens readily found in the artist’s southern coastal region. Linear striations scarify her surfaces and are cast in rich hues. Colour and texture dominate, and this focus tips the work into more formally abstract territory.

However beyond formal considerations, in this exhibition the land and sea are presented as an enduring source of creative, life-affirming fecundity. With her own particular breed of painterly alchemy, the artist manifests visible and invisible forces drawn from this infinite source.