Gria Shead has long practiced the art of poetic evocation in her sensitively rendered paintings and works on paper. This quality is further developed in her new exhibition La Belle Époque: Casinos and Cigars. In this diverse body of work, haunting interior views of the Monte Carlo Casino hang alongside paintings based on vintage cigar box designs, and Shead’s ongoing iterations on the subject of Kate Kelly – bushranger Ned’s remarkable yet often overlooked younger sister. All combine to create a rich visual exploration of the French belle époque, while the artist delves into personal and broader cultural links between France and Australia.

Opened in 1879, the Monte Carlo Casino embodies the opulence, sensual mores, and cultural refinements of la belle époque – France’s golden period at the turn of the century. Yet while the Casino’s visual splendor and reputation as a meeting place for creative giants of the era form rich points for artistic investigation in their own right, the inspiration for this series came from a source much closer to home when Shead discovered a bundle of old postcards that feature interiors of the Casino. These were sent from her grandmother, who lived in Monte Carlo and was married to a musician in the Monte Carlo orchestra, to Shead’s great grandmother who emigrated to Australia in 1882.

This bright period of creative blossoming in France suddenly took on a new personal dimension for the artist, as she turned her focus to capturing the faded glory of the Casino interiors. Devoid of inhabitants, its empty rooms become like vessels that carry the intangible impressions of lived human experience. Traces of countless human stories, fortunes won and lost, are embedded upon the luxurious surfaces that the artist deftly captures with oil on board.

This exhibition features a series of paintings inspired by the decorative designs found on the inside of cigar box lids. During this period cigars became a commodity that were indicative of elevated social status, and synonymous with cultural refinements of the age. In the Australian context cigar boxes were to become associated with the work of Australian Impressionist painters operating at the turn of the century. Many budding Australian painters visited France during the late nineteenth and early twentieth centuries, absorbing the heady artistic atmosphere of Paris and the radical Impressionist movement. Australian audiences had their first real taste of this new French style in the 9 by 5 Impression Exhibition held in Melbourne in 1889. Here daring young artists Tom Roberts, Charles Conder, and Arthur Streeton exhibited works in this new international style, famously painted on 9 x 5 inch cigar box lids.

Shead hints at this important moment in Australian art history in her series of paintings that enlarge and amplify the decorative vignettes found on cigar box lids of the era. Focusing on their unique design and typographic qualities, these works feature ornately bordered scenes with stylized portraits of women at their centre, complete with picture-perfect postcard backdrops. 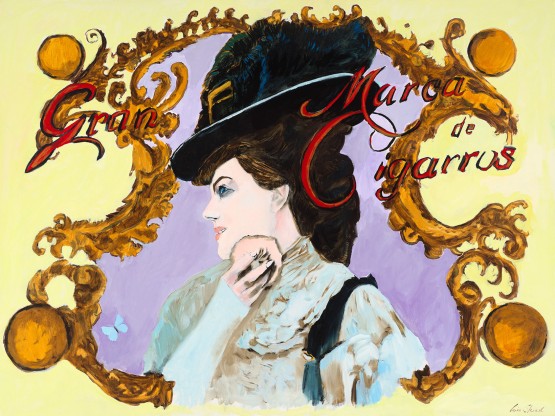 While referencing links to the Australian Impressionists, it is the aesthetic of Art Nouveau that finds exquisite expression in this series of paintings. This movement rose to prominence in belle époque France, with its most prolific flowering within graphic and applied art forms. Along with its characteristically sinuous lines and organic curves, Art Nouveau expressed the growing concept of femme nouvelle – the modern woman who rejected conventional ideas of female domesticity and subservience. It is no coincidence that the term féminisme (feminism) was coined by the French socialist philosopher Charles Fourier in 1837. Modern French art began to reflect a burgeoning sense of agency and autonomy of women in society. Femme nouvelles famously grace the work of Alphonse Mucha, Henri de Toulouse-Lautrec, and are here captured by Shead in her exploration of more ephemeral visual expressions of the age.

The opulence of belle époque France is at stark odds with the Australian experience during this period, and this exhibition sees Shead bring these two alternate realities together in her ongoing exploration into the historical figure of Kate Kelly. One could argue Kate was the ultimate femme nouvelle, though divorced from luxurious trappings and modern refinements that inform our understanding of the term.

Shead has long explored the forces of migration and colonisation that have shaped Australia, and the untold histories embedded therein. Kate Kelly’s is one such story. The rebellious sister of her infamous brother Ned, Kate led a life of hardship and resilience. In this body of work she returns wearing her brother’s famous mask, placed in the Australian bush in poses that echo performers of la belle époque. While Kate lived through the same time frame of la belle époque, this period of cultural refinement and beauty could not have been further removed from the hardships she endured in Australia. Yet here she is depicted languorous, graceful, and elevated to a position of the feminine ideal that refer to paintings that hung on the Casino walls.

Shead’s paintings of Kate blend western conventions of representing the female nude, with the ubiquitous Kelly mask and all that it represents in Australian culture. Once again the artist seeks to reveal the complex and multivalent roles that women played in the formation of cultural identity, and how these specific tales are often skimmed over by history. 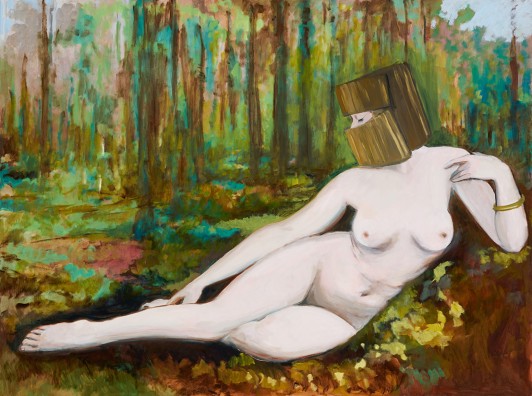 Whether it is the story of Kate Kelly, Shead’s great grandmother who was born in the same year, or the anonymous yet engaging cigar box belles, this body of work sees the artist investigate cultural movements and personal archives through a lens of feminine experience. In doing so Shead acknowledges the untold stories that reside beneath the visual splendor synonymous with this period in France, that though long since past, remains golden. 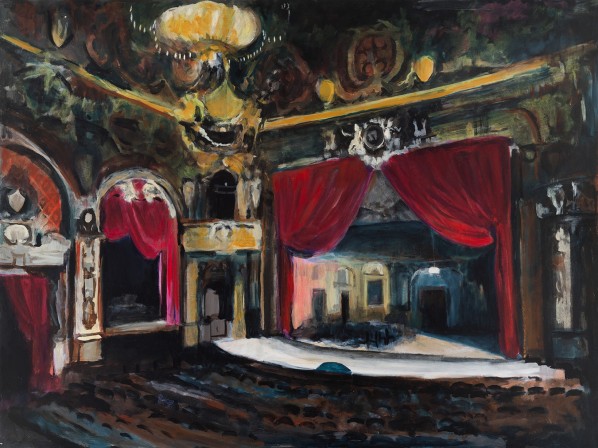