Prints from the British Museum / Uncategorized

Baccio Baldini (c.1436–1487) is the elusive artist to whom these astrologically inspired engravings, created around 1464, are attributed.

Titled The Planets, this series of seven prints reflect prevailing systems of knowledge that during the 15th century governed the way people viewed the world around them. Specifically, they refer to the Ptolemaic concept of the universe where the earth resides at its centre, around which seven planets revolve including the sun and the moon.[i] Each engraving in the series depicts the personification of a planet (the Moon, Sun, Mercury, Venus, Mars, Jupiter, Saturn) presiding over the activities of its ‘children’ below – a popular subject for artistic interpretation in the 15th and 16th centuries.[ii]

Few hard facts are known about Baldini. The great Renaissance chronicler Giorgio Vasari (1511–1574) made passing mention of him as a goldsmith who lacked disegno, the talent to both conceive and design original visual ideas, suggesting that he largely relied upon the work of Sandro Botticelli (c.1444/5–1510).[iii] Yet more recent scholarly efforts have resulted in over 100 engravings being attributed to Baldini or his school, positioning this mysterious figure as one of the most important Florentine printmakers of the period.[iv] As such Baldini and his followers were amongst the earliest pioneers of what was then a relatively new graphic medium. They adapted engraving from the goldsmith’s craft of applying ornamental designs onto silver and gold, into a technique that could be used to incise increasingly complex images into metal plates, in order to reproduce them onto paper via the printing process.[v]

As a series The Planets express a vast gamut of human experience in pictorial form. In each bustling image multiple figures engage in a dazzling array of activities that display the customs and rituals of different facets of society. Invisible planetary energy is enacted by the populace, described in a style that appears both richly ornamental and disarmingly naïve. Within each print numerous micro-scenes and their surrounding natural and architectural features seem to meander through the picture plane toward a characteristically high horizon line. While the sometimes awkward manner in which objects and figures recede through space reflects an understanding of perspective that was not yet fully refined.

In the engraving of Saturn, this dour planet is personified as an elderly bearded man carrying a scythe, riding upon a chariot in the sky. Below him on earth the scene is filled with figures enacting ‘lowly’ pursuits, which according to ancient texts were ruled by Saturn.[vi] Coarse looking men work the land, butcher pigs, beg, while a man in the bottom left foreground is constrained in the stocks and in the distance another hangs from the gallows. 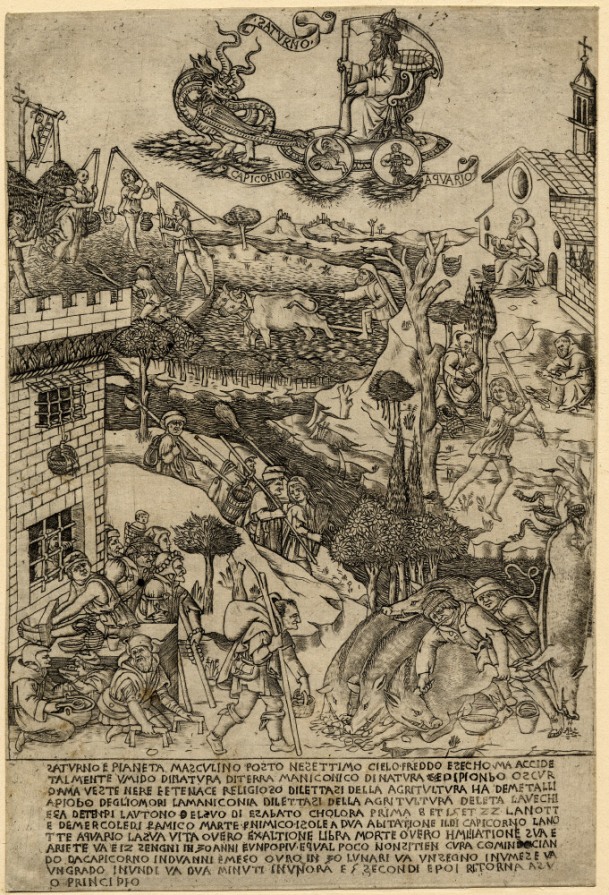 As an entity The Planets series reflect the authority that astrology once held in the public imagination as a unique system that could not only explain the cosmos, but the order of society itself. This includes why some were fated to endure toil and ill luck like the children of Saturn, and others were blessed with wealth and power such as the children of Jupiter. From a contemporary viewpoint one could argue they contain a socio-political subtext, reinforcing the structure of the class-based society that produced them. To contest one’s rank and condition in life is futile if it is has already been ordained by the stars. 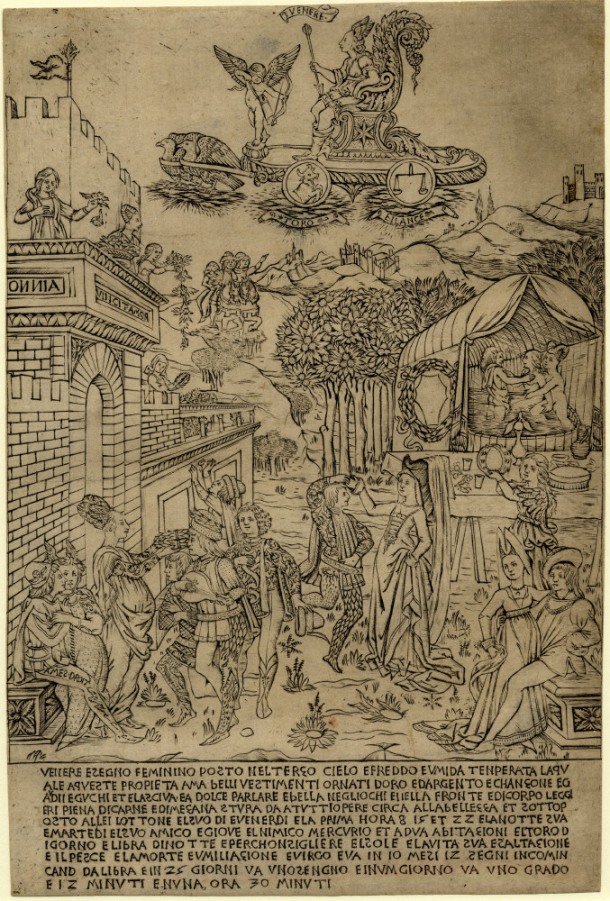 While astrology has endured as one of most well-loved and popular branches of the occult, it no longer commands the widely respected aura of intellectual prestige that this curious mix of philosophy, science and mysticism once enjoyed. Yet this early series of engravings reflects a universal human impulse that remains unchanged. Namely the desire to understand the fickle tides of love, fortune and hardship, and apply some system of logic to the chaos life so frequently presents.

[i] For a detailed discussion of astrological lore as expressed in The Planets see Mark. J Zucker, The Illustrated Bartsch, Early Italian Masters, Vol. 24, Commentary Part I, Abaris Books, 1993, pp. 94-95

[v] The idea to engrave onto metal plates in order to produce prints first arose in Germany in the 1430s, and in Italy developed separately and at least a decade later. For a straightforward overview of the historical origins of engraving and key developments in the history of this art form see; Antony Griffiths, Prints and Printmaking: An Introduction to the History and Techniques, (Second ed.) British Museum Press, London, 1996, pp. 38 – 57

[vi] For further information on sources for the texts depicted accompanying each print in The Planets, which details its character the occupations of those born under its influence, see F. Saxl “The Literary Sources of the Finiguerra Planets” The Journal of the Warburg Institute, Vol. 2, No. 1, July 1938.

Currently I am studying in the Prints and Drawings Department at the British Museum, having been awarded the Harold Wright & Sarah and William Holmes Scholarship, administered through the University of Melbourne. This fantastic opportunity allows me to research widely within the BM’s incredible collection of graphic art. Through this blog I will be sharing some of the most intriguing and often surprising works I have come across as I move through aspects of the collection. 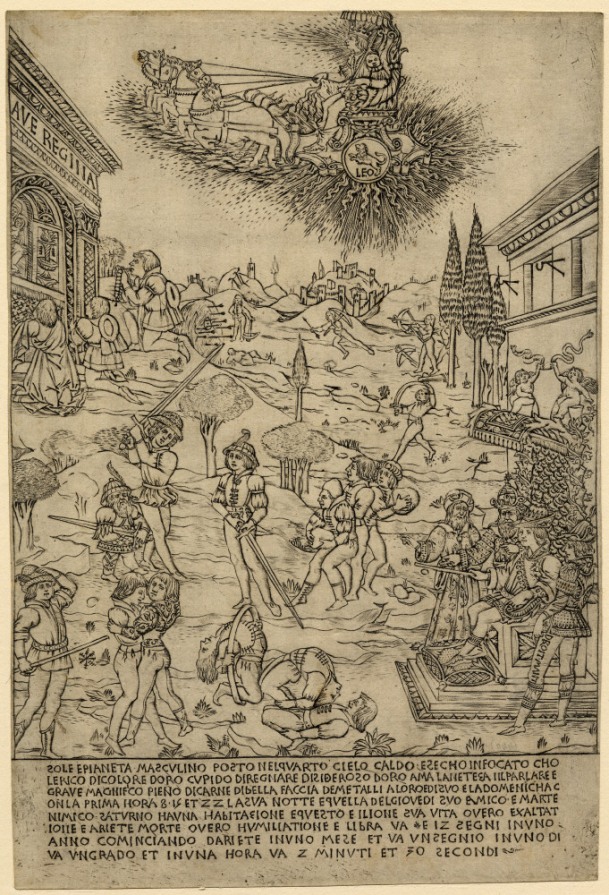 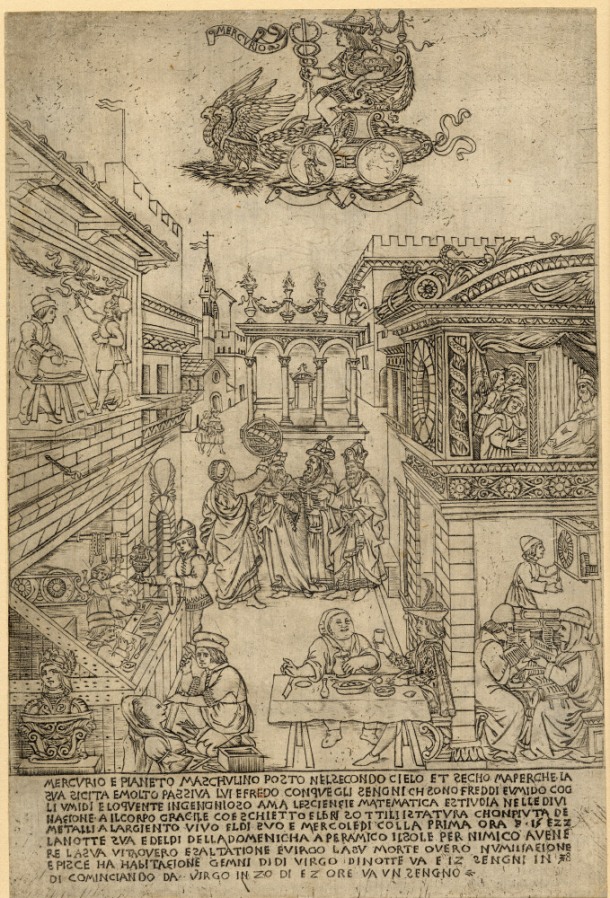 2 thoughts on “Visioning The Planets in 15th century Florentine printmaking”