Looking at the work of Waldemar Kolbusz and one can sense that here the act of painting engenders pictorial discovery. Process becomes adventure as in the spirit of abstract expressionism, he abandons ties to painterly conventions and sets out to find his own path and generate an individual visual language. Yet exactly what Kolbusz seeks to communicate is not pre-determined. It relies as much on the viewers’ internalized reaction to it as what the artist puts down on the canvas, and this reflexivity is central to its appeal.

Robert Motherwell once quoted symbolist painter Odilon Redon who said that artworks should “inspire and are not meant to be defined. They determine nothing. They place us, as does music, in the ambiguous realm of the undetermined.”[i] It is this ambiguous realm that New York School abstractionists such as Motherwell positioned themselves in the mid 20th Century, as they broke away from the long tradition of figurative narratives in Western art. Generations later their legacy continues in painters of today such as Kolbusz, who work in a non-objective abstracted manner to inspire feelings, sensations and perhaps cue visual memories, rather than spell out a story or define a concept. It is from this intuitive space that Kolbusz conjures each unique work and the mood it inspires

One of the most important facets of Kolbusz’ art is his use of colour, which can be both startling and sophisticated. In this exhibition the artist reveals his talent for creating unusual and dynamic encounters with colours, where fields that oscillate between muted neutral tones, to vivid, saturated hues are arranged on the picture plane. Colliding into each other, they make shapes that take on random dimensions. There is rarely a smooth dissolution of one glowing section into another, rather shapes and marks seem to clamor for attention as the artist wrestles their co-existence into an over-riding sense of organic equilibrium.

Kolbusz animates his surfaces with a range of different techniques. Sometimes the paint is applied as a stain of sheer colour, which is allowed to gather and drip. In other areas thicker paintwork and broad brush-strokes dominate and bristle against more aqueous forms. Occasionally sharply defined linear marks that are almost graphic in nature are cast against a pale ground. Glyph-like in their contained brevity of form, they act as markers of some secret language, one that seeks to communicate what words cannot.

While his images may not directly derive from the natural world and are more broadly inspired by the gamut of sensory experience – for me the fresh aquas and greenish hues of some works call forth visions of the Indian Ocean and its cool embrace. In others a rich palette of yellows and earthy reds evoke the colours of a desert landscape, and all of its arid intensity.

Yet regardless of palette choices, Kolbusz’ vivid and freeform paintings celebrate the act of creation itself as they resonate with the raw energy of spontaneous gesture. 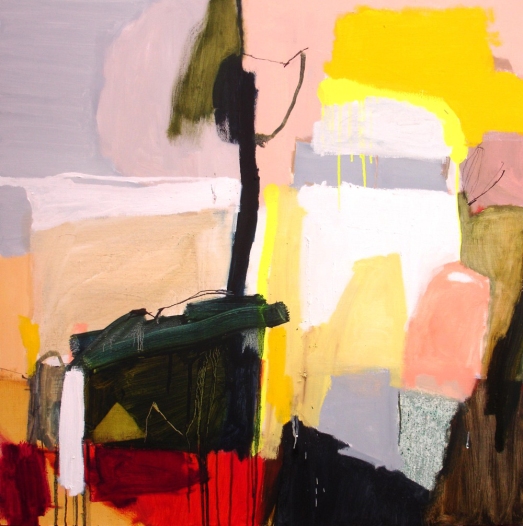 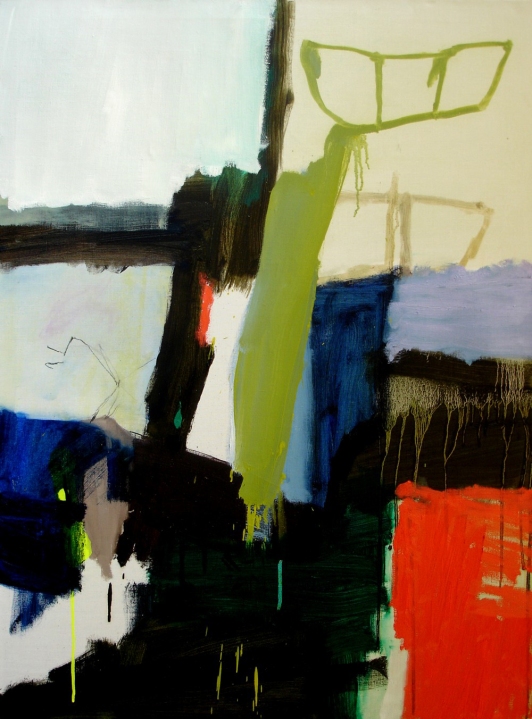