Tasmanian based artist Milan Milojevic is a pioneer in the field of digital printmaking. His work has recently been subject of a retrospective exhibition, A World Between: A Survey of Prints by Milan Milojevic showing at Plimsoll Gallery in Hobart, Tasmania. This is the original article from which an excerpt was published back in 2009 in the printmaking journal Imprint, Vol. 44, No. 4, Summer, pp. 22 – 23. 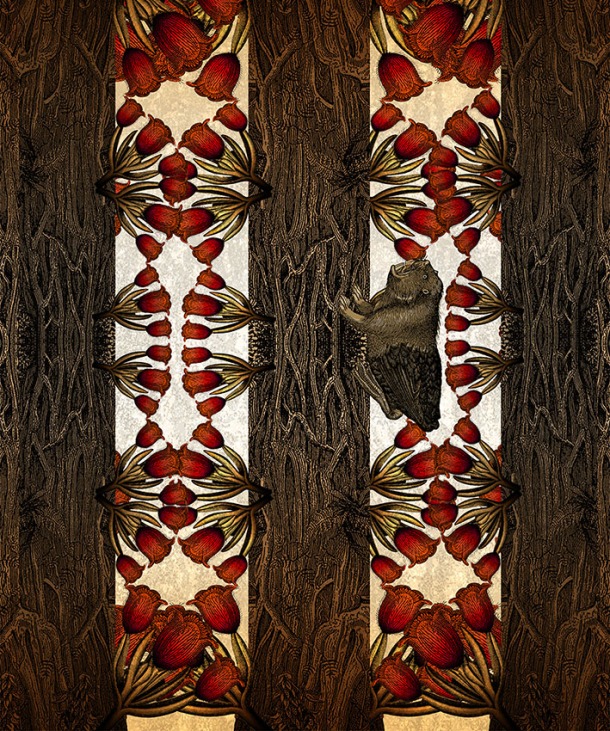 In H.G Wells’ novel of 1896, The Island of Doctor Moreau, the author creates a nightmarish vision of a mad doctor who conducts gruesome experiments on animals and humans attempting to alter their species. The 19th century debate on vivisection, or surgical experimentation on living organisms informed Wells’ portrayal of Dr Moreau’s abhorrent creations. This recent body of work by Milan Milojevic also features a cast of hybridised animals, however his are inspired by mythical creatures that have been imagined since antiquity, and instead of horror we find an elaborate, kaleidoscopic beauty. Yet Milojevic’s prints do contain a subtle subtext that relates to the use of science in the quest for a utopian ideal – and the strange results of humankind’s historic zeal to modify, recreate and thus control nature.

Milojevic combines digital printmaking with etching and woodcut techniques, and his prints frequently employ the visual effects of symmetry and repetition. The ordered appearance of ambivalent forms make them seem both alien and familiar, like fragments taken from nature that have been enlarged and re-contextualised to form new species. Through his own experimentation Milojevic has created a universe populated by hybrid flora and fauna that generate a sense of wonder in its audience. Yet this wonder is accompanied by the uneasy knowledge that the world created is a dystopian one, a fabricated version of reality that nonetheless seduces with its spectacular forms that leap off the paper with technicolour intensity.

Early engravings and woodcuts that recorded plant and animal life from the New World are important source material for Milojevic when constructing his fictional beasts. As precursor to photography, printmaking formed a primary method of documentation and dissemination, and as such the artist’s interpretation of a thing became regarded as unbiased fact. In this the work of hunter and artist John James Audubon (1785 – 1851) has particularly influenced Milojevic’s recent work. Audubon famously illustrated 435 of America’s bird species in a huge volume titled Birds of America. Yet a gruesome truth lies behind these romantic and much acclaimed images, as Audubon would hunt the birds and once dead prop them up in his studio, still dripping with blood to render them life sized in their imagined habitats. To fit them into the sheet size used for the book, Audubon would often contort the birds into strange positions, sometimes just fitting onto the page. The tension between fact and fiction embodied by Audubon’s methods compelled Milojevic when constructing his own version of reality in the works Pinnacle Grouse (after Audubon), Peryton (after Audubon), Golum (after Audubon) and Hau-Fish (after Audubon). Paying homage to Audubon’s strange compositional technique of bird portraiture, in these prints Milojevic’s mythic beings appear just contained within the confines of the image. 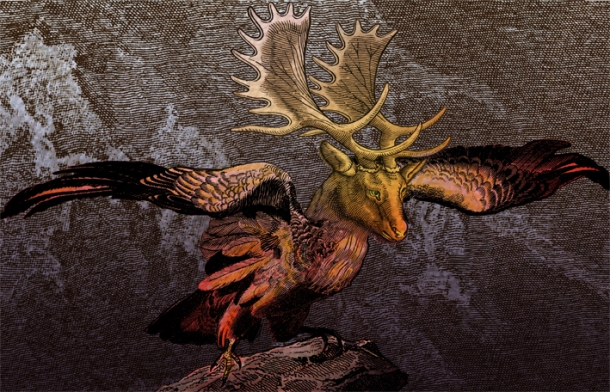 The most impressive piece in the exhibition is informed by another 18th century European tradition. Outside – In is a 48 panelled work constructed to wallpaper part of the gallery. It is astounding in its complexity, its fusion of bold, electric colour with the most delicate detail, and the sheer technical prowess required in its printing and cohesion as a whole. Inspired by French scenic wallpapers produced in the 18th century by companies such as Zuber, Miljoevic consciously brings an exterior realm to an interior space. Zuber wallpaper often featured idealised images of exotic locations that bore little resemblance to reality – perfect for consumption in a non-threatening domestic setting. Similarly Milojevic has invented a beautiful fiction where coral and fishlike creations encroach on tree/land based forms signifying the meeting, and perhaps collision of different worlds.

The works in The Cabinet of Dr Moreau… combine to conjure a particularly masculine, 18th century concept of interior space. The function of a man’s cabinet as a place to keep prized curiosities from distant lands in a small, perfectly contained microcosm is very much connected to the idea of possession and dominion. This sensibility is reinforced by the series of works made from imagery printed onto fabric and upholstered to wooden shapes reminiscent of furniture from this period. Yet while they bear an immediate resemblance to furniture, further inspection reveals their complete disfunctionality as such, and again all is not as it seems in Dr Moreau’s cabinet.

Throughout this exhibition, Milojevic creates complex images that like an escapist fantasy lure the viewer into an invented universe that is deftly described through a fusion of printmaking techniques. Informed by the way artists have captured and re-visioned the natural world through the centuries, Milojevic has again created a totally unique space where fantasy and fact collide to make the impossible possible.

This exhibition, Milan Milojevic: From the Cabinet of Dr. Moreau… was shown at James Makin Gallery, Collingwood (Melbourne) from 12 November to 5 December 2009.