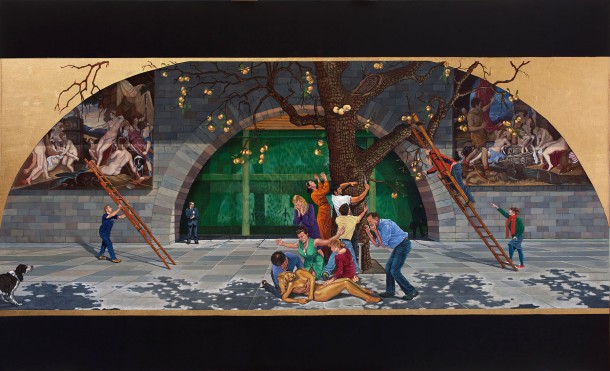 Figurative painting has had a lot to contend with over the last century. Since the invention of photography, there have been numerous claims about the death of painting as a means of relevant artistic expression in the modern age.  While painting as a whole has come under fire, the genre of figurative painting has had its own particular battlegrounds, most prominently through the dominance of post-war abstraction which challenged the authority of the representational painted image. Following the ensuing schism which polarised artists in the middle of the 20th century, the subsequent rise of conceptual art and new media has rendered painting as the poor cousin of more cutting edge ‘innovative’ art forms in the minds of some.

Within the pluralism of styles and techniques that defines contemporary art practice, one might ask if it still possible to be genuinely innovative within the tradition of figurative narrative painting, a genre so entrenched in story of Art History? There are some artists working in Australia at present who answer that question with a resounding yes. One such artist is Eolo Paul Bottaro, a Melbourne based painter who consciously engages with history to create strikingly original images. Bottaro blends past with present in a manner that contributes something novel to the ancient discourse of figurative art.

This occurs on multiple levels. In terms of technique, the artist is extremely focused on materials. Bottaro has researched pre-industrial revolution methods of making paints from pure hand-ground pigments, and prepares his own canvases, applying chalk-based gesso. He then layers egg-tempera underpainting with fine glazes of oil paint creating depth of colour and subtlety of tone. This manner of painting according to various recipes of mediums, pigments, and binders is reminiscent of some culinary extravaganza, where the eye rather than the mouth devours the finished product. 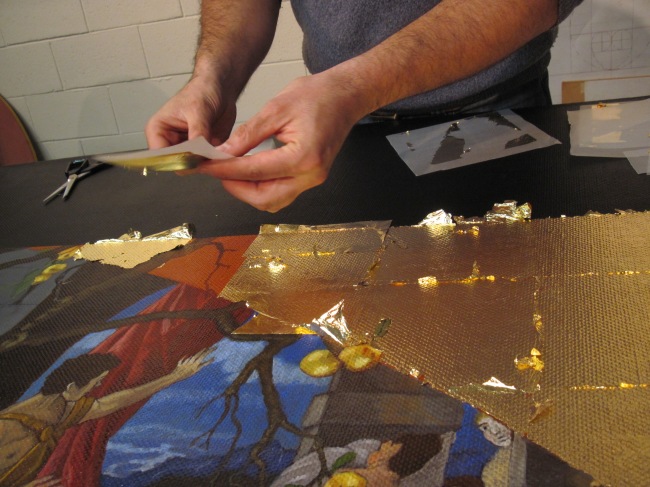 The artist applying of gold leaf to his painting ‘Pactolus’ (2011)

No doubt the thrill of practicing what are virtually lost techniques, or at least on the brink of extinction, for a unique result is a major motivation behind Bottaro’s heavily process driven methodology. And that result is work that looks different from other realist figurative painting that is currently being produced in Australia. There is a luminosity and intensity of colour, coupled with rich surface qualities as the many fine layers of hand crafted paints interact. These now rare but once widely practiced techniques lend the work an aesthetic quality that stands out.

In regards to imagery, Bottaro’s love of great painting is ever present. In many ways he creates art about art – with references to both historical and contemporary artworks woven into the fabric of his figurative imagery. Sometimes the composition of an early artwork is re-interpreted, brought to life in an urban setting with the artist’s friends and family cast as various characters.

Bottaro’s major work Pactolus, on display at this year’s Melbourne Art Fair, is an example of his novel approach to telling universal human narratives. Here we find the myth of King Midas, enacted in all of its fraught intensity before the National Gallery of Victoria’s facade. Midas, whose hunger for riches led him to mistakenly turn his daughter to gold, is a story of greed, loss and redemption. In the current global climate of financial upheaval and crisis, the moral of Midas could not be more apt to speak of the ancient nature of our very present problems. The composition of the main figure group is drawn from Michelangelo’s sketch of The Crucifixion, but instead of the cross Bottaro paints a huge tree covered in golden apples that figures scramble toward, oblivious of the desperate scene in their midst. It’s an innovative fusion of pagan mythology with religious compositional elements, framed by a gilded arch and heavy black bands that reiterate the filmic quality of this dramatic moment.

In Joyride – city jam the composition is inspired by a 16th Century painting Il Concerto campestre, attributed to masters of the Venetian renaissance, Giorgione and Titian. Bottaro re-interprets the scene on the banks of the Yarra, an electric guitar replacing a lute, and a nude woman baring the infinity dragon tattoo on her back to the viewer. While the enigmatic scene of clothed and nude figures retains its mystery, Bottaro replaces the dreamy softness of Giorgione with an edgy clarity and realism, depicting real people, both beautiful and flawed, instead of stylised allegorical figures. The small figure of a man shooting a kangaroo is introduced into the background, offsetting the musical beauty of the scene with a dark undercurrent. Manet was also inspired by Il Concerto campestre to create his Le Dejeuner sur l’herbe which caused outrage when it was exhibited in the Paris Salon of 1863. Bottaro’s interpretation will exhibit at the Salon’s 21st century counterpart (of sorts), the Melbourne Art Fair, and a centuries old conversation between artists, imagery and audience continues. Perhaps this conversation is the real subject of Joyride.

The art world will forever absorb trends and fashions in its constant search for the next new thing. However rather than divorcing history from contemporary expression, Bottaro’s work uses it to draw our focus to the eternal nature of questions that surround human experience. Perhaps therein lies its enduring appeal.

4 thoughts on “Beyond realism, the art of EOLO PAUL BOTTARO”