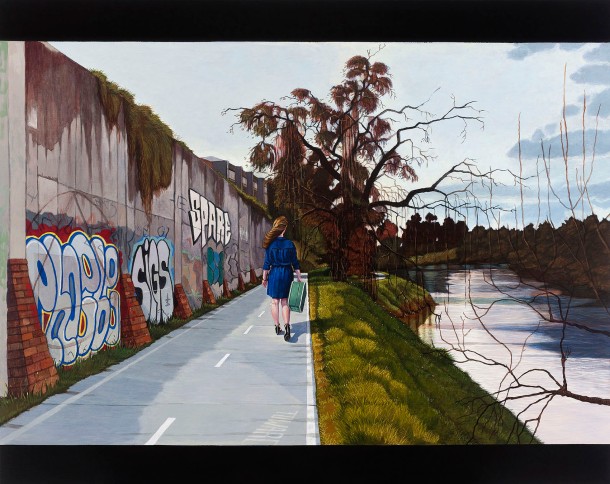 Colour Without a Name, the latest exhibition by Eolo Paul Bottaro presents an enigmatic series of paintings inspired by the creative contemporaries, urban locales, and historical artworks that have lodged in the artist’s prolific imagination. The cryptic title of this exhibition, which evokes ideas surrounding perception and the limits of understanding, is an appropriate one to sum up this new body of work. Bottaro paints images that are infused with mystery and symbolism, and that explore existential questions that continue to haunt the human condition. While aesthetically speaking the artist’s cohesive fusion of pictorial elements reinterpreted from multiple sources, reveals a creative vision that is almost cinematic in its scope and ambition.

Bottaro avoids the contemporary artistic convention of working in series, where multiple works are made exploring one overall theme or idea. Rather, each painting presents a unique aesthetic and conceptual investigation into a particular topic, which is not repeated. This approach has resulted in a body of work that is notable for the depth and richness of its diversity on many levels. However, while creating highly idiosyncratic images, certain overall thematic threads unite these recent paintings.

These include his frequent representation of public buildings and urban spaces that become animated by human interactions within them, alternating between dramatic, surreal and commonplace.  End of the Rainbow (2013) exhibits the darker end of this spectrum. Framed by the monumental structure which forms the base of the Sydney Harbour Bridge, three men stand over the crumpled figure of a fourth. In an image that does not directly portray violence, but resounds with its aftermath Bottaro subverts a postcard view of Sydney replete with two of Australia’s most important and iconic tourist attractions, the Opera House and Harbour Bridge. By doing so he draws attention to confronting urban realities that dwell beneath a glossy surface. 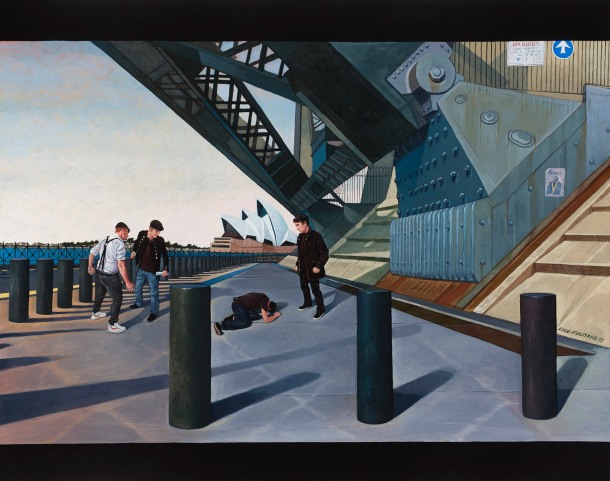 Other works conduct an intriguing investigation into the notion of lost histories. Whether through theft, fire, or some inexplicable reason, the history of art is marked by the disappearance of numerous masterpieces and minor works that over the centuries have simply vanished. We are now only aware of their existence through remaining fragments of drawings, or reproductive prints such as engravings and woodcuts, that were once the sole medium in which contemporary art was visually disseminated.

Framing a kind of conceptual, art historical archaeology, Bottaro has brought these lost works back into existence by reinterpreting their compositions in the creation of new paintings. Works such as A Lion Doesn’t Lose Sleep Over the Opinion of Sheep (2013) typify this impulse. Here St Jerome is re-imagined as a biker riding into a storm water tunnel, surrounded by lions resting upon the banks of the Merri Creek, in Melbourne’s inner north where the artist lives and works. The composition is based on a woodcut of St Jerome surrounded by lions which is held in the collection of the National Gallery of Victoria, and which is possibly based on a lost work by Titian. Bottaro adopts the image to explore the notion of a spiritual wilderness, expressed in a verdant yet unmistakably urban environment. 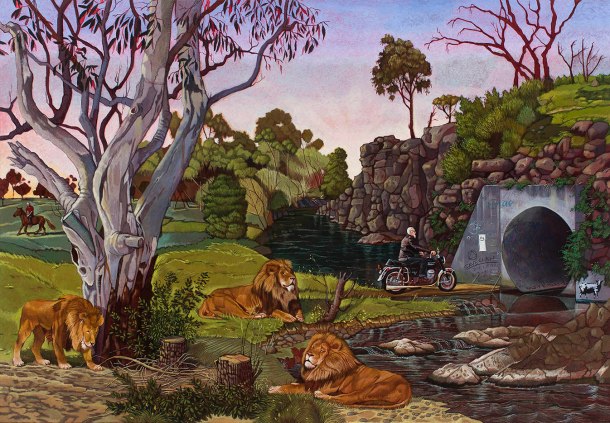 This painting is rich with symbolic allusions. The yawning mouth of the tunnel and its concealed darkness into which the man appears about to enter, evokes an almost mythic quest-like journey where the protagonist must face the underworld before emerging back into the light. The three resplendent lions that appear like gatekeepers reinforce the image’s archetypal resonance.  Just as in the bible account of St Jerome, the lions are a magnanimous presence. While common to the saint’s iconography from the middle-ages onwards, their inclusion in this contemporary location adorned with graffiti and gum trees lends the work an element of fantasy that pushes towards the surreal.

Bottaro continues this recreation of lost masterpieces in the major work Peter Robb, M, and the Prickly Pear (2013). In the 1960s the mafia stole a Caravaggio nativity painting from a church in Palermo, Sicily. Bottaro chose to reinterpret the composition of this Caravaggio in a painting of Peter Robb, the author of many books including M, which explores the life of the infamous old master. In this fictional collision of past and present, which also includes a representation of Caravaggio himself, alongside Bottaro’s Sicilian grandfather peeling a prickly pear (the cactus fruit which is riddled throughout Sicily) and the artist riding into the composition on the back of a motorbike – Bottaro creates a dynamic allegorical multi-portrait that draws heavily upon his Sicilian cultural heritage for its dramatic intensity. 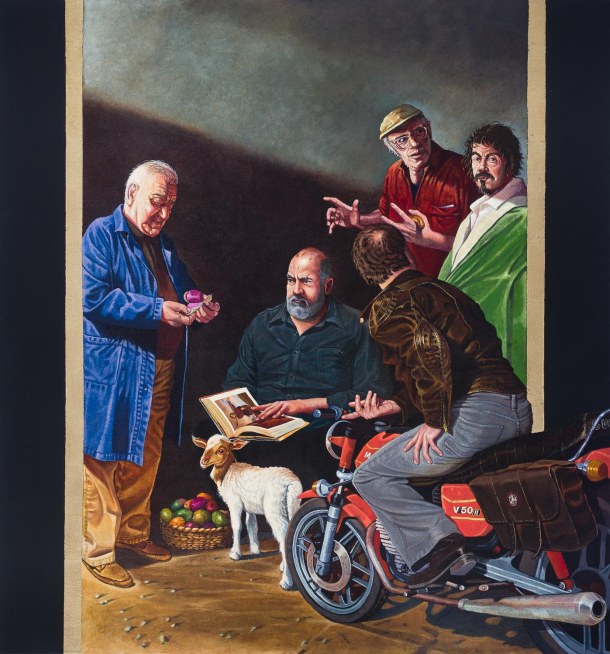 In this and other portraits that feature in the exhibition, Bottaro captures fellow creatives such as curators, composers, chefs and writers who are inspirational on a both personal and artistic level. This includes gifted composer and musician Tamil Rogeon, of Melbourne based duo The Raah Project, amongst other collaborations. In this work Rogeon appears absorbed in the internalized rapture of listening to music, with the faded vestiges of figures from a Titian painting cast behind him. Known for his innovative fusion of electronic music, urban beats, with traditional orchestral arrangements, his practice is reflected in the portrait’s title Listening to the Past to Hear the Future, Tamil Rogeon.

Turning from symbol infused allegories to the world of bricks and mortar, other works continue the artist’s ongoing exploration of monumental architecture and Melbourne’s public spaces. In his epic 170 x 400 cm painting 333 based on Melbourne’s historic 333 Collins St building, Bottaro paints the elaborate structure risen like a phoenix from the infamous financial crash that occurred during its redevelopment in the late 1980s – early 1990s, which sparked a recession and devastated the building industry. Comprised of three panels that reflect stages of the building’s development and completion, the artist has skillfully manipulated space, light, and geometry to evoke these essential architectural elements through oil paint. In the past Bottaro has also represented NGV International, Royal Exhibition Buildings and the Shrine of Remembrance in his fusion of grand architecture and sometimes emotionally fraught mythic narratives. Whereas 333 appears more a celebration of human endeavor and ingenuity, expressing a uniquely humanist impulse.

Eolo Paul Bottaro operates within the broadly categorised genre of contemporary realism. Yet despite the finely executed and detailed naturalism that defines his style, his work resides outside of a popular photorealist vernacular which has experienced a recent resurgence in contemporary Australian art. His visible love affair with the formal elements of painting and craftsmanship, coupled with an exuberant imagination, and his almost archeological approach to excavating art history to aid the conveyance of meaning in his work, expands it well beyond the edges of a snapshot.

Published in the Melbourne Review, July 2013.

2 thoughts on “Colour Without a Name – EOLO PAUL BOTTARO”