Eugene Von Guérard: Nature Revealed gives us an insight into the wonder that this European artist, who evidently possessed a passion for exploration and scientific documentation as much as art making, would have experienced as he moved through the foreign Australian countryside. Von Guérard was born in Vienna in 1811, studied at the Dusseldorf Academy – a progressive school for landscape painting, and at the age of 41 moved to Australia. His landscapes which describe sweeping vistas with meticulous detail, are usually associated with the 18th century notion of the sublime, a term coined to describe the beauty, terror and awe found within the natural world. This important romantic idea which it is still being explored by artists today certainly exists in von Guérard’s oeuvre. His works usually feature tiny figures in the foreground, giving a sense of scale and conveying Man’s smallness and insignificance against the backdrop of age old mountains and weathered cliffs and valleys – the ancient bones of the earth. While his jaw-droppingly spectacular views of mountain ranges such as the Grampians, Mt Kosciusko, and Milford Sound are at once dangerous and compelling in the true spirit of the sublime. 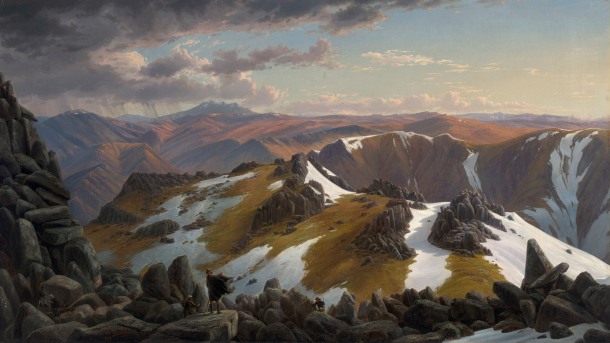 While registering the sublime and picturesque European landscape traditions that informed von Guérard, this exhibition comprehensively explores his early influences, framing the artist from a particularly scientific perspective. It contextualises von Guérard’s formative years within the milieu of scientific discovery that the artist was exposed to, in particular the theories of Alexander Von Homboldt, a renown German natural scientist.

Von Homboldt urged artists to record the landscape and its plant life with complete accuracy and truth to nature, while in the spirit of enquiry that categorised the age he also encouraged artists to apply their talents to unchartered lands beyond Europe.

It would surely interest both the artist and scientist to know that some 150 years later one of von Guérard’s paintings of the ‘new world’, titled Tower Hill would be used as a vital document in the conservation efforts to revegetate the coastal area it represents in South Western Victoria, which had been severely environmentally degraded since it was painted by von Guérard in 1855. Such was the meticulous detail and empirical accuracy with which von Guérard recorded the plant-life and geology of Australia, that his work forms an important record from an environmental perspective, as well as an art historical one. 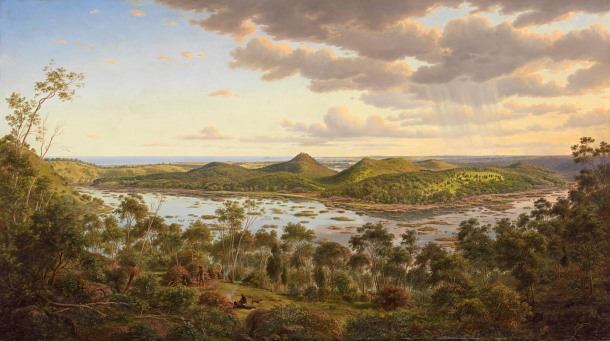 Much has changed within the Australian landscape in the 160 odd years since von Guérard began painting it. I came away from this exhibition with a sense of gratitude for the artist’s curiosity and intrepidness which are responsible for these precious records of unspoilt natural locations. Von Guérard, sometimes in the company of scientists, at other times alone, often braved the elements on foot and horseback to scale impressive mountainous heights. The Mt Kosciusko pictures most readily speak of the rugged conditions encountered, in particular North-east view from the northern top of Mount Kosciusko of 1863, which takes in the snow capped peaks viewed from the top of the mountain. Famously his party nearly perished on that particular expedition.

Regardless of location these works are painted with clarity and show a deep appreciation for his subject. While the curators convincingly argue for the scientific motivation behind von Guérard’s practice, his artistic concerns remained paramount as he brought his knowledge and training of the great European landscape traditions to Australian shores.  This is evidenced in his lyrical compositions where sometimes rocks and landforms would be manipulated slightly for the benefit of the overall structure of the image, his sensitivity to light, often pinkish hued, which hints at sunsets or early dawn as it falls across the landscape and illuminates the sky, and his strategic placement of a distant farmhouse or figures in the foreground, often introducing some minor narrative element.

In the world von Guérard creates, all of these aspects – plants, geology, shifting skies, human figures and evidence of colonisation, exist in a warm and mellow harmony. However we know the reality was a different tale, at least in relation to human interaction.

There is one painting that touches, and only just, on the unrest between colonising forces and native Indigenous population. Mr John King’s Station of 1861 takes in a typically sweeping view looking north toward the Alpine National Park from within the yard of King’s family house in Gippsland Victoria. The exhibition catalogue notes that some of the worst skirmishes in Victoria occurred in Gippsland between settlers and the Kurnai population.

In this work von Guérard has painted an Aboriginal family in the foreground, depicting the man standing upright staring straight out at the viewer directly addressing us with his gaze – a striking pose rare in the artist’s oeuvre. A woman and child sit at his feet, she draped in a government-issue blanket. In the distance stands Mr King, back turned to the family and viewer, possibly instructing a gardener crouched before him while surveying the wide stretch of land he has claimed as his own. It is probably the most direct comment on Indigenous/Settler relations that this painter of the landscape ever made, drawing our attention to the state of dispossessed Aboriginal family through juxtaposing them with the wealth and security experienced by King. The landscape von Guérard celebrates is inevitably tied to the fate of both parties, a connection which is made here unequivocally.

Despite this example, von Guérard was not primarily a painter of social injustice or dramatic human narratives. His first love was the landscape and his resulting works are a marvel to behold for their technical mastery, for the sheer beauty of the locations he paints, and for the intrepidness they required to create. This freshness of vision allows the viewer to see the Australian landscape from a different, albeit idealised perspective – and creates a sensation akin to being immersed in nature itself. As such this exhibition while presenting a well rounded insight into the artist and his work, is also a satisfying escape from the urban grind. 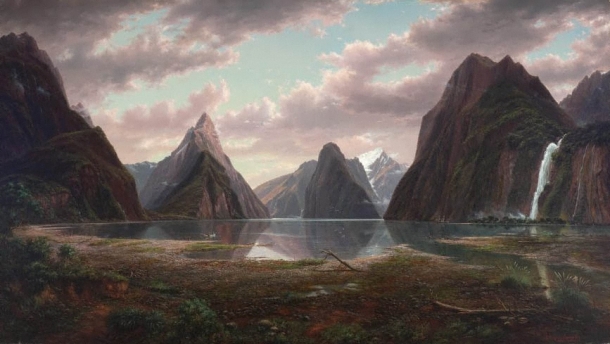