In 2009 Sophia Szilagyi created a memorable exhibition titled ‘Darkness Visible’. Drawing heavily on photographic sources, Szilagyi’s masterful manipulations within the medium of digital printmaking turn reality on its head – creating works that are as unnerving and unsettling as they are seductive. Here is the catalogue essay I wrote for her show. 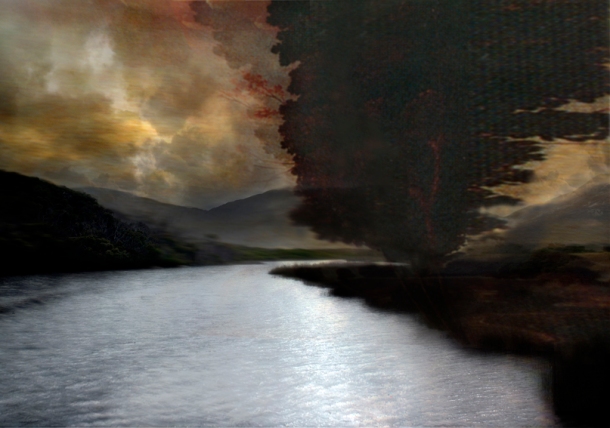 There is a feeling of awe that one experiences when looking at nature at its most grandiose, most frightening, or its most beautiful. A visual image of such a moment may imprint itself upon the mind to eventually exist only in the realm of memory, where over time it can transform into something completely different, yet still bear the markers of how it once existed in the physical world. This is the deep, internalised zone that Sophia Szilagyi draws from to create her imagery. Her artwork explores the role memory plays in how we perceive things in reality – affected as it is by physical experience and emotional response. She puts into tangible form, through digitally created inkjet prints on paper, her inner landscape as comprised of thoughts, dreams, and the sublime beauty and terror of the natural world.

In darkness visible, Szilagyi has created a set of images that are at once breathtaking in their panoramic grandeur, and cloying with a sense of unknown menace. This quality is most powerfully rendered in nature hesitate. Here incandescent gleaming waters meet the dark encroaching shoreline, from which a black form rises towards the heavens. It looks like smoke but that does not necessarily make it so. It was made three days before the devastating Victorian bushfires of February 2009 struck, a premonitory fact that can alter the way we read the image. Yet the shape doesn’t billow, it rises flat against the picture plane, like a sheet of slate slanting ever so slightly towards the viewer. This contrasts with the spatial depth created through the river receding into the distant hills, upon which dirty golden clouds gather as ephemeral forms of mist and air.  What this dark shape represents is a disruption, a break in the order of things. An intrusion on nature, its presence interrupts the harmony of elements so that the image sings with tension. 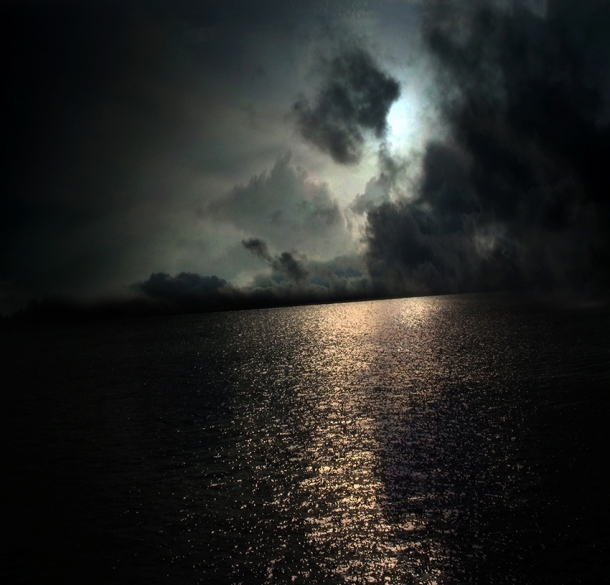 This exhibition sees Szilagyi also investigate the nature of physical vision. In many works objects slide in and out of focus, with some edges clear and others blurred. The horizon is off kilter in vision II, throwing us off balance and forcing the viewer into an unsteady perspective. In some prints Szilagyi layers the opaque imprint of one scene over another, building up the complexity of the image. This is subtly rendered in a matter of the skies where the faint outline of trees can be just discerned in the large mass of blue/grey sky. It’s as if one’s eyes have moved too quickly upward from the trees below, bringing the image of them still imprinted on the retina, to the view of sky above.

Szilagyi uses this technique also in visible darkness. This work which features an eye and hands enlarged almost to the point of abstraction, is the only work with figurative components and is vital to the way the exhibition reads as a whole. Here clouded forms of tattooed fingers partially obscure an eye, whose dark iris almost mirrors the black form in nature hesitate. It unsettles with its painful stare and seems to position a protagonist who views the world as described in the other works, and needs to shield their vision from what it contains. 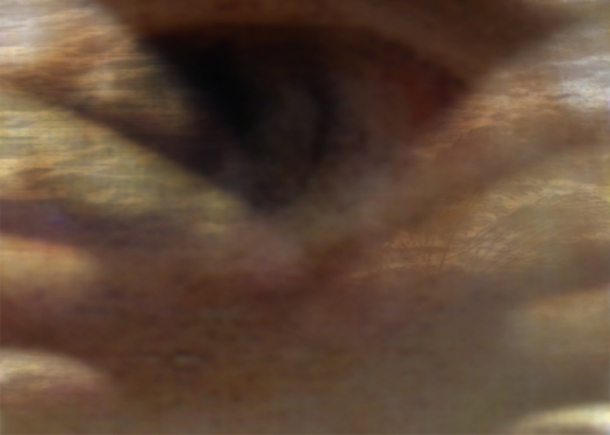 These images are at once heavy and light, dense and expansive. Szilagyi juxtaposes elements which are opposed and whose presence makes more pronounced its opposing force. For example a vast stretch of horizon and glittering sea in furthest shining is marred by the ominous black shape that stretches out over the ocean like fingers seeking out the furthest little island near the horizon. Threadless way features an illuminated path which rises up through a dense green forest. Again a contrast is established by placing a glimmering passage through the heavy darkness of the woods, which are at once fearful and seductive with their velvety green richness and threat of the unseen. 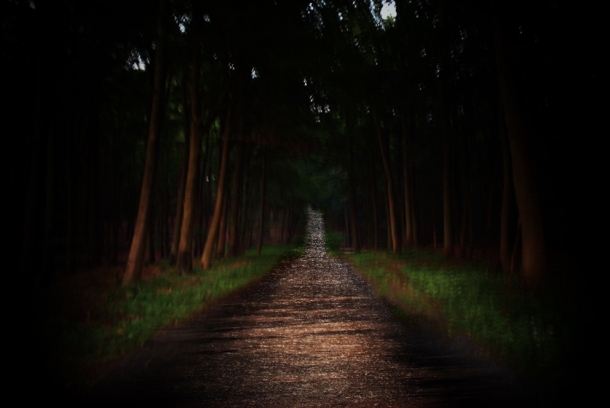 The darkness is real, and Szilagyi shows us a world where it is ever present, even beneath the most shining, bright surface. Yet its depiction seems to make more poignant and powerful those sublime moments of beauty which invariably exist in each multi-faceted work this artist has created.